Put a Shirt on! Dress Codes When Working From Home 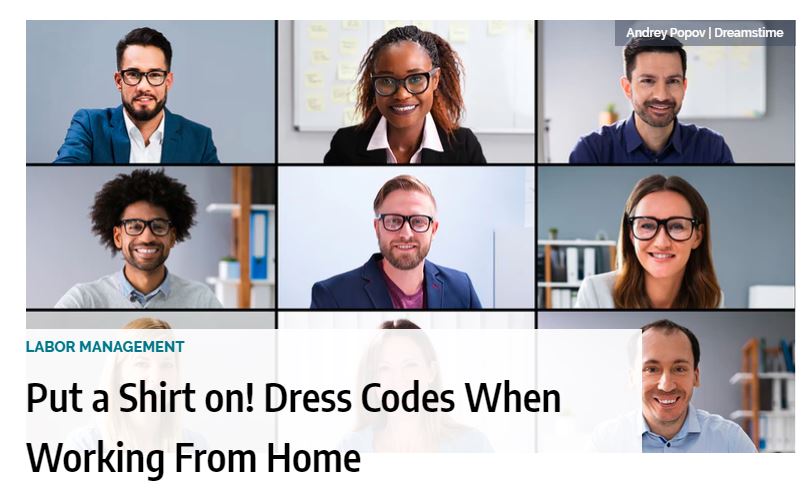 in Interesting things to know!

Mind what you are wearing before you enter that video conference.

While the Coronavirus pandemic is never anything less than grim, some aspects of people’s reactions to it approach the comical.

For many people, the requirement to work from home because of stay-at-home orders also offers them an opportunity to dress down. Sometimes too far down, as some colleagues have found out when they show up for the now-ubiquitous videoconferencing.

One of the advantages of working from home is that you can pretty much dress any way you like, just as long as you don’t end up frightening the family dog and can manage to look respectable when you’re on camera.

Paul D. Burgin, an attorney with the law firm of Shawe Rosenthal LLP, admits that he has traded out his dress shirt and dress pants (and occasional tie) for a hoodie and sweatpants on most days. “Many are in this same situation,” he observes. “Normally bound by dress codes in the office, we suddenly do not have to adhere to these appearance expectations and can dress for comfort.”

Although Burgin asserts that he does make a point of dressing up for videoconferences, he says the technology raises additional questions regarding decorum.

“What should be in the background of a video call? What if someone hears my dog barking on a call? Can I wear shorts to a video meeting? (I know some friends wear a suit jacket and tie to virtual meetings with lacrosse shorts on because, presumably, they can only be seen from the waist up!)”

This is because the general consensus has developed that, at the bare minimum, you should dress professionally above the waist. For attorneys, this is especially true if they have to be present on a video call with the court. Some attorneys working in Florida apparently disagree with this approach and have taken some liberties with their video conference attire—or lack of it—in some instances, drawing the ire of at least one judge.

In mid-April, Broward County Judge Dennis Bailey wrote a letter to the Weston Bar Association complaining about some of the liberties counselors had taken while attending Zoom hearings.

“We’ve seen many lawyers in casual shirts and blouses, with no concern for ill-grooming, in bedrooms with the master bed in the background, etc.,” the judge revealed. “One male lawyer appeared shirtless and one female attorney appeared still in bed, still under the covers. And putting on a beach cover-up won’t cover up you’re poolside in a bathing suit.”

Bailey concluded his message to the attorneys in his county with the unequivocal declaration that “the judges would appreciate it if the lawyers and their clients keep in mind these Zoom hearings are just that: hearings. They are not casual phone conversations. It is remarkable how many attorneys appear inappropriately on camera.”

Burgin agrees. “Putting aside the complete and utter disrespect this shows for the court and the presiding judge, what attorney in their right mind actually thought that this would be appropriate or the least bit acceptable?”

John C. Greiner, an attorney with the law firm of Graydon Head & Ritchey LLP, admits that he recently appeared in a Juvenile Court Zoom hearing wearing a coat and tie paired with jeans and Chuck Taylor gym shoes. “Given that I argued my position in a seated position, this seemed appropriate,” he explained.

However, the judge makes a valid bigger point, Greiner says. “A hearing is a hearing. It matters. And just because the Coronavirus has necessitated remote access, it shouldn’t bleed over into a casual attitude. Lawyers need to prepare and dress for a Zoom hearing as they would for an in-person session. Those who don’t do a disservice to their clients.”

There is one area where Greiner disagrees. He urged that Judge Bailey reconsider his complaint about the attorneys who appeared on camera with a bed clearly visible in the background, asking the jurist to exercise a bit of tolerance in the midst of an admittedly difficult situation, where these guilty parties may have found themselves in a position where they had little choice.

Everyone has different circumstances, he points out. “It’s possible that the lawyer working from a bedroom has limited space and young kids in the other room. The bedroom may be the only alternative.”

Greiner adds, “While judges have every right to insist on appropriate attire and that lawyers actually, you know, get out of bed, they may want to be a little empathetic as it relates to the real challenges everyone faces in an unanticipated work-from-home world.”